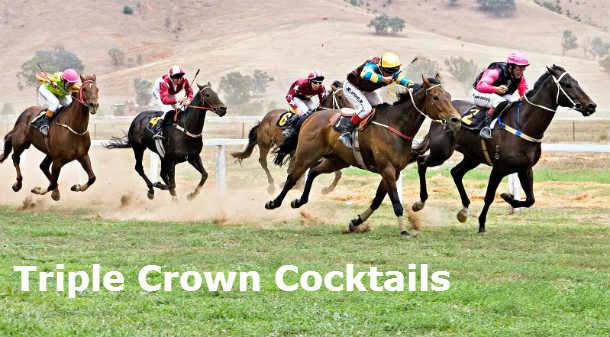 This weekend marks the 147th running of the Belmont Stakes, a Thoroughbred horse race held every June in Belmont Park, NY. This competition is a big one in the world of horse racing as it represents the third and final leg of the Triple Crown. The first two legs are the Kentucky Derby and the Preakness Stakes.

It should come as no surprise that each of these three races has its own signature cocktail. In fact, it seems that horse racing and whiskey go together like Luke and Laura (what can I say, my mom loved General Hospital!) All of the cocktails we will discuss today are primarily bourbon based, which is not only perfect for horse racing, but perfect all summer long! We recently devoted an entire post to the mint julep, so I won’t go into much detail here. I will, however, give you our recipe for quick reference when attempting to make ALL the Triple Crown cocktails at once (like I will). Round two of the Triple Crown is the Preakness Stakes, which is held on the third Saturday in May every year. It takes place at Pimlico Downs right outside of Baltimore, MD. The Preakness was first run in 1973 and is also known as “The Run of the Black-Eyed Susans”.

Why is it known as “The Run of the Black-Eyed Susans” you may ask? Well, if you are the lucky horse that wins the race, you are draped with a blanket of yellow flowers called “black eyed-susans”, also the state flower of Maryland.

Ironically enough, this is where are second cocktail derives its name (if you haven’t already figured that out). The Black-Eyed Susan is sort of a twist on a classic Screwdriver, but bringing in more of a tart taste thanks to the addition of pineapple juice.

Now, there are many variations on the Black Eyed Susan so I’m going to give you two classic versions. The first is the “official” recipe as provided by the Preakness Stakes website.

Add all ingredients to a mixing glass and stir to combine. Fill a Collins glass with crushed ice and pour cocktail over ice. Garnish with a maraschino cherry or orange wheel.

Now here’s the other version that uses whiskey, which, as it turns out was the PREVIOUS “official” version of the drink. Hey, as sponsors change, so do drink recipes.

Add all ingredients to a mixing glass and stir to combine. Fill a Collins glass with crushed ice and pour cocktail over ice. Garnish with a maraschino cherry or orange wheel. As mentioned, the Belmont is the final leg of the Triple Crown. This is the one where dreams come true or are completely shattered. Nicknamed The Test of the Champion, the Belmont Stakes was first run in 1867. In 1973, the most famous horse ever (well, besides Mr. Ed), Secretariat, won the Triple Crown and captured the track a record which has yet to be broken.

As it seems, NY has had some trouble on deciding which cocktail is the official cocktail of the Belmont Stakes. Historically, it’s been the Belmont Breeze, a potent potable consisting of bourbon, sherry, orange juice and a couple of other mixers.

Around 2012, the drink was changed to the Belmont Jewel, named after another race nickname, the “crown jewel” of the Triple Crown. The Belmont Jewel would consist of bourbon, lemonade and pomegranate juice.

Because I am not one to argue, we are going to make both of these bourbon fueled concoctions.

The Belmont Breeze (this is the Dale Degroff version) So there you have it, three winning cocktails to enjoy during Triple Crown season and all summer long. Maybe you can have your own Triple Crown in your house and down all of these in one session…like I did.

Tell us in the comments which Belmont Cocktail you think should be the true official drink of the race.