To the beginning bartender, few things are more disappointing than a mixology meltdown. You know, when “the epic cocktail” you carefully prepare falls apart and takes on a nauseating cough syrup flavor reminiscent of Kool-Aid. That was my greatest fear when a home mixologist friend grabbed a bottle of Cherry Heering during a recent liquor run.

Thankfully, my fears melted away when I learned more about Heering liqueur and tried the Cherry Heering Sour.

Damaging to your pride and a waste of perfectly good liquor, the Dreaded Cough Syrup Effect is something we all encounter. Alcohol might cure everything from aging to heartbreak, but it definitely shouldn’t taste like medicine. Unless that’s what you’re into, and in that case, please don’t invite me.

Understandably, I was a little apprehensive when my companion selected a bottle of Original Cherry Heering Liqueur during our trip to a little spirits shop in Gent, Belgium. Even a little whiff from the bottle that evening couldn’t change my mind. I was certain that it was going to be awful, just plain horrible… kind of like the pun I came up with on the spot:

“Was I heeeering you correctly when you said that this was good stuff?”

Yeah. I got about the same response that time, too… But in my defense, Heering is pronounced “herring” (like the fish) in Dutch. And since my friend is Flemish it should have been a real knee –slapper. 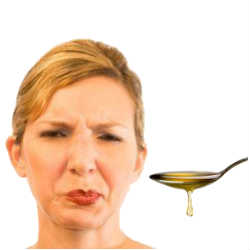 What is Cherry Heering Liqueur?

If you’re not familiar with Cherry Heering, don’t feel ashamed, I wasn’t either. But after my bartender presented his customary research, I got intrigued. A European standard created by Danish boozeologist Mr. Peter Heerring, Heering Cherry is a cask-aged liqueur made with crushed cherries, neutral grain spirits and spices. The result is a delicious spirit that will prove to any critic that Mr. Herring certainly knew a thing or two about liqueurs.

And if that’s not enough, I also found some truly monumental brownie and cookie recipes featuring Heering liqueurs. In my opinion, chocolate and cherries are a match made in someplace better than heaven, so between a recipe that changed my life for the drunker better and epic dessert possibilities, you’d be crazy not to give Cherry Heering a shot. 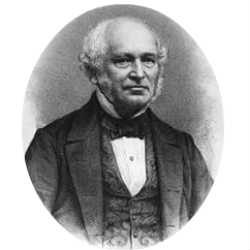 Cherry Heering has been around since 1818 and was originally supplied to Danish the British monarchy and royal courts throughout Europe. Considered the original cherry brandy, it has survived and thrived, garnering a reputation for superior quality. Evenmore, Cherry Heering has earned the respect of contemporary mixologists, evident through its inclusion in many of today’s most popular craft cocktails. 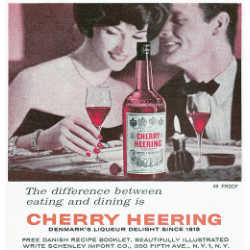 The Cherry Heering Sour: Our Variation

Feeling decidedly experimental, my bartender and I stumbled across a recipe for the Cherry Heering Sour, and I’m glad we did. There are quite a few cocktail recipes featuring this liqueur and we were nervous about the unadulterated cherryness of the Heering while looking for something less sweet. Needless to say, it was a HUGE success. 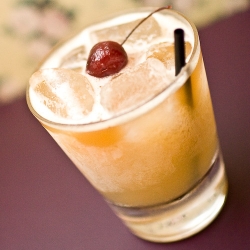 Why the Cherry Heering Sour Rocks

Despite our many permutations, I just couldn’t get sick of this fabulous mix. After settling on our final recipe, I had two in a row and found them delightful. And as a sanity check I enjoyed another the following night… which was equally delicious.

The Cherry Heering Sour has it all: Flavor, texture and finish. It’s sour with a bourbony golden undertone and bright cherry highlights. The egg white gives it a velvety texture that you simply won’t find in most cocktails. Finally, the bitters (if you decide to include them) give this drink a very soft licorice aftertaste. The whole package including the bourbon and Peychaud’s bitters lends the Cherry Heering Sour a slight New Orleans slant.

And None of That…

Remember The Dreaded Cough Syrup Effect? You’ll get none of that.

With the Cherry Heering Sour you can spend your time and energy mixing a delicious cocktail instead of worrying about an unscheduled visit from the Kool-Aid man belting out his customary OHHH YEAHHHH! 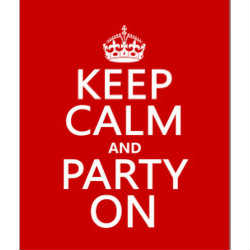 Hailing from Montréal, Nieta chills with international cocktail enthusiasts and lives to tell the tales. She's into ballroom dance, neurofunk drum & bass, languages, and displays an affinity for the family vice: Gin. Drop her a line at lunascribe.com.