The Martinez Cocktail: A Classic 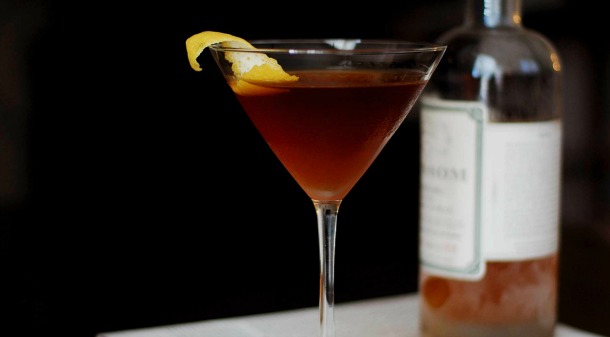 Truth be told I had never heard of the Martinez cocktail until recently, but after a substantial amount of experimentation I’m totally hooked. Delicious and complex, this cocktail has a warmth to it that I’ve never experienced with Gin. It’s rapidly become a favorite and I don’t foresee that changing any time soon.

The Martinez Cocktail: A Muddled History

The history of the Martinez revolves around a number of theories and can be considered muddled at best. While some suggest that the cocktail was created by seminal San Francisco bartender Jerry Thomas, others cite another area bartender O. H. Byron and still more suggest other possibilities. However based on most of the legends, it appears that the cocktail was created for those travelling between San Francisco and Martinez, California during the latter half of the 19th century. At least that appears to the consensus guesstimate. Whoever it was, they did a damn fine job!

Precursor to the Martini

Despite the foggy history surrounding the Martinez cocktail, there’s no doubt that it was a step in the evolution of the Martini. The first mention of this libation was made in an 1888 bartenders’ manual that instructed bartenders to mix a Martinez the “Same as a Manhattan, only you substitute gin for whisky.”  Clearly a move toward the drier side, the next step to a Gin Martini was not a reach. As a result, the Martinez cocktail is considered a true classic. A Sea of Martinez Recipes

Like most drink recipes the “right” recipe depends on your own taste and the Martinez cocktail is no exception. There’s no limit to the number of opinions expressed across the interwebs, but there are definitely a few that stand out. My favorite posts on the topic include:

After looking at a heap of recipes, I tried to simplify the essential differences to figure out which Martinez cocktail recipe was right for me. So there were:

After being kinda overwhelmed by all the options, I picked three recipes to test out. In short I wanted to try several different options to figure out what appeals to me. Here’s what I came up with:

Comment: Vermouth heavy, this is one of the earliest recorded recipes for the Martinez, so I had to try it. I used Bombay Saphire Gin, Carpano Antico Vermouth and substituted Angostura bitters which apparently is a close match to the originally required Bokers Bitters. Overall I was surprised that I didn’t hate it; it has a richer body and but on the sweeter side with a bitter twinge.

The Martinez Cocktail by Jamie Boudreau

Comment: As with the previous recipe, I used Bombay Saphire Gin and Carpano Antico Vermouth. Frankly this recipe fell flat for me. I think that without the traditional bitters it was just sweet and without depth.

Comment: This produced a drier cocktail that offered more complexity that the other two. I’m not sure if the use of two bitters isn’t kosher, but in my opinion it worked. Once again, I used Bombay Saphire Gin, Carpano Antico Vermouth

Hands down, my favorite Martinez cocktail recipe is Erik Ellestad’s version. Generally I’m not a big fan of sweeter cocktails and those versions with greater proportions of Vermouth left me flat. Moreover after messing around with the many different ingredients, I found that the use of the bitters made a surprising difference.

Overall it’s possible that the use of Old Tom Gin may create a dramatically different cocktail, but for now the Martinez using a London Dry-Style Gin will be a definite go-to cocktail.