Layered Shots: A Guide for Beginners

Now that you’re older and wiser, the thought of offering your guests a shot must seem downright laughable. You are, after all, a classy individual and the whole reason you got into cocktails in the first place is to become even classier. Well, I’m here to tell you that you can still make shots for your friends and still be the epitome of class.

How you ask? Layered shots. Both artistic and delicious, layered shots will enliven any affair while also maintaining your air of sophisticated cool. Now a lot of people avoid layered drinks because it seems quite complicated, but I assure you by the end of this article, you’ll be layering shots like a champ.

Now the great thing about making layered shots is that you finally get a chance to dust off your shot glass collection. Everyone has a shot glass collection whether they planned to have one or not. Sometime during your college years, a few of them are introduced into your ecosystem and then during your 20’s they begin to multiply in a process science has never quite been able to explain. 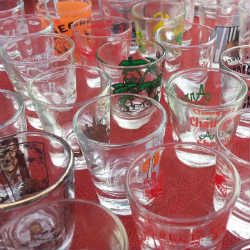 Unfortunately, as your number of shot glasses grows your enjoyment of doing shots is decreasing at the exact same rate. This inverse relation reaches its peak when you turn 30 as you now have enough shot glasses to start a museum, but the thought of doing a shot makes your stomach do a backflip.

Once you begin your journey into layering shots, you will be able to display your shot glasses again with pride… or at the very least not bury them in the back of your cupboards behind your highball glasses.What Are Layered Shots?

Layered shots are drinks where spirits of different densities are carefully placed on top of each other to create a dramatic visual appearance. When done correctly it looks a bit like a magic trick, as several layers of liquid are floating on top of each other.

Layering shots is not difficult but it’s an important skill to have for any budding mixologist. While it’s unlikely that you’ll be using this skill on a nightly basis, layering produces dramatic results and you can apply the concept to a variety of other layered drinks. So let me break it all down as simply as possible.

Often referred to as Pousse Café, layering began in the mid-1800s with a French layered drink designed to include a coffee chaser. Layering can be a bit tricky to learn at first, but with practice it shouldn’t take too long until you get the hang of it.

What Do You Need to Layer a Shot?

Thankfully you don’t need much to execute a perfect layered shot.

Hint: Some people will tell you that you should put the spoon in the freezer first, but in my experience, I haven’t found it necessary. In fact, I once made layered shots at my job using a plastic spoon.

Perhaps the most important aspect to successful layered shots is understanding ingredient density. The densest (or heaviest) liquids go at the bottom and the lightest at the top. How do you know which one is densest? Generally the fluids that have the most sugars are the densest and the ones that are mostly alcohol are the lightest. But to prevent you from guessing and saving a lot of time, we’ve prepared a guide:

Layered Shot Example: The B-52

Now, you’d think that since Irish Cream is, well, cream that it would be the densest, but it’s actually the Kahlua since it is so thick and syrupy. The Grand Mariner, which is so light it’s flammable, goes on top. Here’s a sample from our Layered Shots Liquor Density Guide: 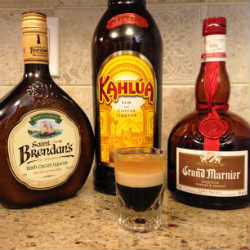 Like most layered shots, a successful B-52 requires patience and a little technique. However once you master the basics, you’ll be able to apply them almost anywhere.

In this example there are three liquors, so we’ll make three layers:

Step 1: Create a Base with the Densest Liquor

Create a base to the layered shot starting with the liquor with the greatest density; in this case it’s the Kahlua. Pour the Kahlua directly into your now-useful-again shot glass to lay your foundation. You’ll want to pour about a third full as you’ll want all of your layers to be even. 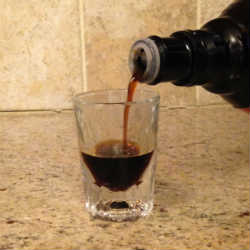 To add the next layer, place an upside down spoon (concave side down) in the shot glass against the glass slightly above the first layer. Add the next heaviest ingredient (Irish Cream) by slowly pouring over the back of the spoon.

You’ll need to pour slowly to prevent gravity from causing the Irish Cream to pierce the surface of the Kahlua, causing them to mix. The spoon softens the landing, so to speak, and allows the lighter liquid to gently float on top of the denser liquid. 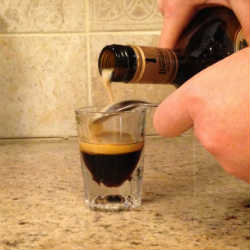 Complete the shot by topping it with the lightest liquor (Grand Marnier) and you should have a shot that looks like this: 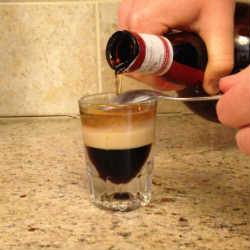 Step 4: Drink it With Gusto

You’ve created a cool looking layered shot right? No doubt you wish you could savor it, but that’s not how this works. Much like the Tibetan Buddhist practice of Sand Mandala, the destruction of your beautiful creation is as much a part of the ritual as creating it. 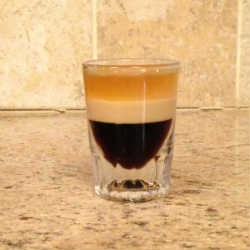 After originally publishing this post, we encountered another technique that some will find useful. If you have a European bar spoon, you’ll impress your guests with this layering technique presented by Rob Rademaker at Bols Bartending Academy:

Needless to say Rob’s layered shot technique is definitely impressive and it’s one that I’ve used several times. After some experimentation, the key to my success is definitely having the right bar spoon and a shot glass with a heavier base. Here are a couple products that I’ve purchased for my own home bar that should help you get up the learning curve: 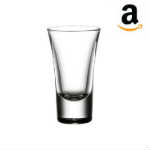 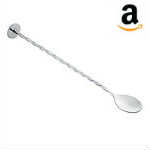 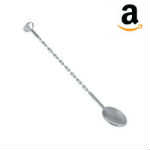 So, toss it back with gusto and vigor. Layered shots are not only visually interesting, but tasty too. Now, dust off your shot glass collection, grab a few friends, and apply your new found skills at your next party to create a big hit.

Ryan is a devotee of the fine art of mixology, although half the time he just makes himself boozy milkshakes. He's also kind of funny and has a monthly live show called People of Interest at the Philly Improv Theater.