How to Make a Mint Julep: The Basics 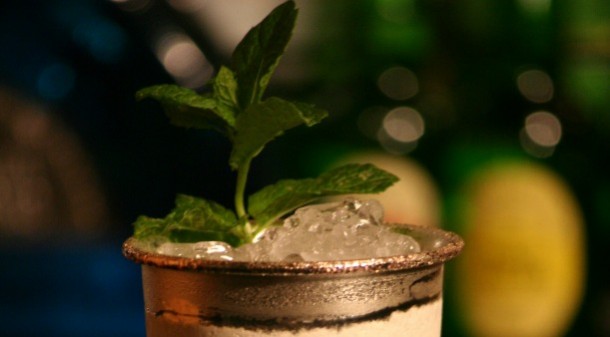 Perhaps best known as the official drink of the Kentucky Derby, the Mint Julep is a classic, bourbon-based American cocktail that everyone needs to try at least once. Comprised of one part tradition, one part myth and one part deliciousness, I like everything about the Mint Julep. That said, it’s sometimes tough to determine where style ends and substance begins.

Unfortunately consumption of Mint Julep is often unfairly relegated to early May, however it’s an excellent choice throughout the summer. A cocktail that requires some technique and experimentation to get just right, the Mint Julep is just plain cool. From the traditions surrounding it’s preparation to the frost that covers the silver cup, a well-assembled Julep will definitely impress your guests.

The Mint Julep: A Brief History

Few drinks have inspired as much myth and speculation as the Mint Julep. A revered concoction that reportedly began as a medicine, it was first mentioned in 1784 in a medical publication //wiki.webtender.com/wiki/Mint_Julep . Since then, the true origin of the Mint Julep has been hotly debated by the south; while many regard Kentucky as the Mint Julep’s birthplace, there are historic references to West Virginia , Georgia and Virginia too. Needless to say, we’ll probably never know.

Since its birth, the Mint Julep has evolved over time. Originally crafted from brandy or whiskey, the poverty brought upon the south after the Civil War prompted the switch to less expensive bourbon. In 1875 Churchill Downs first began serving the Mint Julep and it achieved an almost mythical status in 1938 when it became the track’s signature libation.

Ode to the Mint Julep

Few cocktails elicit the passion and reverence achieved by the Mint Julep. In this video, professional bartender Chris McMillian describes the art behind preparing a proper Mint Julep at the Ritz-Carlton, New Orleans.

In recent years the Mint Julep has seen in a decline in popularity apparently fueled by changing contemporary tastes and the practical problems of serving a proper Julep. Modern drinkers seem to lean more toward neutral sprits and the effort required to prepare the cocktail is often more than what most bars are willing to spend so the Mint Julep may not be at the height of fashion. Regardless, if tradition and ceremony have any place in our culture, it’s in the making of a Mint Julep!

Preparing a proper Mint Julep is really not difficult, but there are a number of steps involved to get it just right. To be perfectly honest I’m not an expert, but I’ll share with you what I’ve learned and hope that you do the same by sharing your experiences in the comments below.

I found that there’s definitely some variation in preparing a good Mint Julep, but here are the basic steps.

Serving the Mint Julep is Pretty Straight Forward. Generally I’ve Seen Some Recipes that Mention Including a Short Straw, But That Doesn’t Appear Very Common. Regardless, Always Serve With a Napkin.

To be clear, you can put as much or as little effort into preparing your Mint Julep, but I figure that if I’m going to do it I’m going all out. Here’s what I learned:

Alternative Recipes For the Mint Julep

For those interested in looking beyond my experience with the Mint Julep, there are a number of interesting recipes crying out for attention. First and foremost, there are a couple recipes contained with Jerry Thomas’ Bartenders Guide (1887 Reprint), the original cocktail guide:

Take three or four sprigs of fresh mint, and press them well in the sugar and water, until the flavor of the mint is extracted ; add the brandy, and fill the glass with fine shaved ice, then draw out the sprigs of mint and insert them in the ice with the stems downward, so that the leaves will be above, in the shape of a bouquet; arrange berries, and small pieces of sliced orange on top in a tasty manner, dash with Jamaica rum, and serve with a straw.

Put the mint in the tumbler, add the sugar, having previously dissolved it in a little water, then the brandy, and lastly, fill up the glass with shaved ice. Stir with a spoon but do not crush the mint. This is the genuine method of concocting a Southern mint julep, but whiskey may be substituted for brandy if preferred.

Classic in all respects, the Mint Julep is one cocktail that has stood the test of time and certainly deserving of a place in your cocktail repertoire. Like any refresher worth making it does require some attention to detail in its preparation, but it’s likely that you and your guests are worth it.