How to Make Ginger Beer 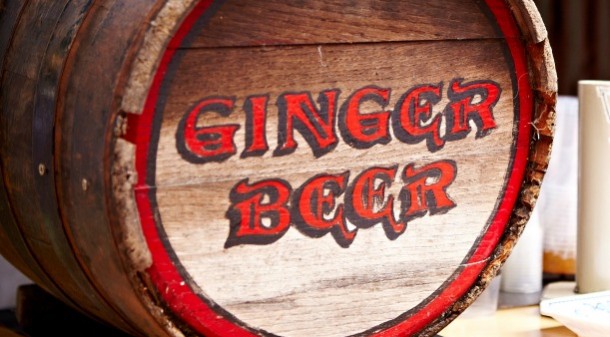 Spicy and fragrant, ginger beer adds a dose of exotic flavor to every cocktail it touches. Familiar due to its relation to Ginger Ale, it has a much more pungent flavor ranging from mildly tangy to downright spicy.

I fell in love with ginger beer when some friends introduced me to the classic Dark ‘n Stormy cocktail and I’ve been a fan ever since. For those that enjoy unique flavors, it’s definitely a go-to. Offering a familiar yet distinctive flavor, its one mixer that just about everyone can get behind.

After recently encountering a post on A Bar Above  that included a “cheater” ginger beer recipe I decided to dive right in.

Overall the process was very easy and once you’ve assembled the necessary ingredients, it should only take about an hour to prepare. Peeling the Ginger was the most difficult task, but everything else is easy.

One thing that I really like about making your own ginger beer syrup is that you can adjust the taste to your preference. I found the original recipe’s observation that a 3:1 ratio of syrup to club soda creates a nicely spiced ginger beer is spot on, but a 4:1 ratio will work well for those with a milder palate.

Ginger beer cocktails are tasty and unique, but I’ve found that there are relatively few. Perhaps it’s because the flavor is so distinctive or maybe this mixer has fallen out of fashion, but whatever the case the one’s I’ve tried are delicious. Consider these ginger beer cocktail recipes and let me know what you think in the comments: Invented in 1941 by a bar owner and spirits distributor in New York’s Chatham Hotel, the Moscow Mule quickly swept Hollywood and spread to become famous across the west coast. Commonly served in a distinctive copper mug (story here) you can simply use a highball glass. A great option for the fall season, this cocktail was created at Philadelphia Talula’s Garden is refreshing, perfect for sipping on a cool fall evening. Originally a non-alcoholic cocktail dating back to the 1890s, brandy soon found its way into this cocktail. Popular with the Royal Navy in the mid-1960s, this drink partnered with the venerable Gin & Tonic as the traditional go-to at cocktail parties. A classic by anyone’s account. Spicy and unique, I think that it would be tough to find someone that doesn’t gravitate toward this tasty ginger beer cocktail. Whether you’re hosting a party or just hanging out with friends, the sign of a considerate host is having a selection of appetizing non-alcoholic at the ready for those that either choose not to drink or may have already had a bit too much. This take on the traditional Dark ‘n Stormy is a refreshing option that will allow your guest to enjoy themselves without feeling left out or sentenced to an ordinary soft drink.

I’ve done my best to research some of the better ginger beer cocktails, but my liver will only allow me to take it so far. That said here are a few more options that you may enjoy. Although I have not tried each of these ginger beer recipes, the thought of a maple-flavored Nor’Easter sounds pretty tempting.

Making your own ginger beer is definitely easy, fun and unique, but if you don’t have the time or it’s just unappealing, there are plenty of ginger beer brands begging for your attention. Of the 3 non-alcoholic ginger beer brands I’ve tried, my favorite is Goya but that’s personal taste.

Here’ a brief description of each. Most can be found on Amazon.com. *Note: The links to these products are affiliate links which means we receive a commission if you make a purchase using this link.

Update: I just found Abraham Wallin’s Best Ginger Beers of 2013 which gets into some serious detail and also has a downloadable Ginger Beer guide. Clearly he’s committed (or should be 😉 )