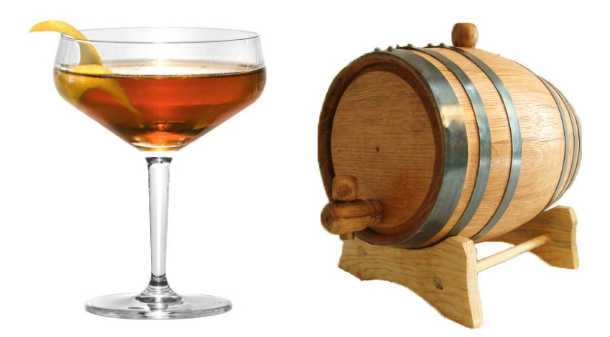 After discovering barrel aged cocktails last summer, we’ve been feverishly experimenting and in this post I’d like to tell you about the barrel aged Vieux Carré. Applying the basics we’ve previously discussed, another winner was created. 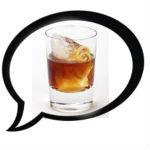 Before we go any further, it’s important that I answer the question How Do You Pronounce Vieux Carré? After all, no matter your level of experience you should always sound like you know what you’re doing. Right?

And if you’d like to hear someone pronounce Vieux Carré, give this a listen:

History of the Vieux Carré Cocktail

A delicious drink stands on its own, but a cocktail like the Vieux Carré always seems to taste better when there’s a story behind it. And there’s plenty of background

Created in depression-era (1938) New Orleans, the Vieux Carré was birthed by Walter Bergeron the head bartender at what is now The Carousel Bar in the Hotel Monteleone. Frequented by distinguished southern authors such as Tennessee Williams and William Faulkner, Truman Capote himself used to brag that he was born there. Featuring a rotating bar, it should definitely be on your to do list if you make it to the Crescent City.

Translated as “the old square,” the Vieux Carré is a local reference to the French Quarter. According to the Hotel Monteleone, the cocktail was created as a tribute to the many different ethnic groups of the city including French, American, Italian and Caribbean.

Although finding a consistent recipe for some cocktails can be challenging, this wasn’t the case for the Vieux Carré. After a little “testing” it was clear that this would be an excellent option as a cask aged cocktail. Offering a rich, warm flavor, it’s probably a better option for cooler times of the year, but that’s just my opinion. We applied a little basic math to the following recipe for our cask aged Vieux Carré:

Using a large glass bowl, we combined all of the ingredients, mixed them well and confirmed that the results were consistent with our previous research. Understandably we wouldn’t want to wait for months to taste an old, poorly made cocktail… Afterward we filled the oak cask.

After a little research, I found this video that lays out all the basic steps in casking the Vieux Carré

Overall we found that while the Vieux Carré didn’t change as dramatically as some of the others we tested, it clearly benefited from more age. Testing the flavor by extracting a sip using a straw every week or so provided the following results:

Week 4 – While the flavor profile improved and there was less of an alcoholic bite, the Vieux Carré was still rough around the edges. Unlike our first experiences, the oaky flavor was much less obvious.

Week 5 – Definitely benefiting from the cask aging, the cocktail had really improved. The oak flavor became much more pronounced but the alcoholic edge was still there.

Week 6 – At this point, the cocktail’s flavors had developed a rich subtlety with the perfect balance of oak, which suited our taste. As a result we drained the cask and bottled the result.

Overall, our barrel aged Vieux Carré cocktail was a big hit and we definitely plan on doing this one again. The resulting flavor made it very obvious that most cocktail fans simply won’t get the chance to experience something unless they do it themselves. So if you’re interested in trying barrel aged cocktails at home, the Vieux Carré will not disappoint.

aging barrel how to rye whiskey